Bianca Amaro is elected as the new president of LA Referencia 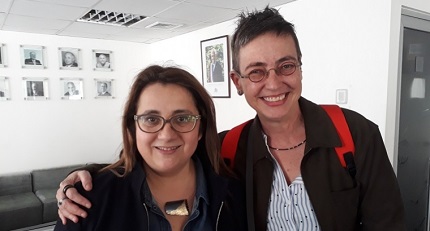 In the meeting of its Board of Directors, held on October 25 and 26 in Santiago, Chile, LA Referencia elected Bianca Amaro, General Coordinator of Research and Maintenance of Consolidated Products of the Brazilian Institute of Information in Science and Technology (IBICT), as its new president for a two-year term.

(Source: LA Referencia) Bianca Amaro is one of the founders of LA Referencia and represents the region on the Board of Directors of COAR (Confederation of Open Access Repositories). She is also Coordinator of the Brazilian Digital Library of Theses and Dissertations - BDTD and the Open Access Scientific Publications Portal - oasisbr. In 2015, she was received the Electronic Publishing Trust for Development Award, given to those who contributed significantly to the progress of open access in the developing world. "The future challenge", declared the new president, "will be to ensure that actions related to Open Science are carried out in all Latin American countries, so that we can increasingly show the importance and importance of Science in our region."

The Presidency of LA Referencia was held so far by Patricia Muñoz, Director of Scientific Information of CONICYT Chile, who served for two years in the position. On the occasion, the Network Council unanimously appreciated the excellent work done by Muñoz towards the institutionalization and political representation of the network, articulating a vision of public goods for open science in Latin America.

Muñoz, in turn, congratulated Bianca Amaro and thanked her for the support, as well as reiterated the Council's commitment to accompany the new Presidency. She also stated: "During this period, the Network has been consolidated both in its governance and in its role in articulating policies and services for open science in the region. The precedent is framed within the purposes of LA Referencia, which is to develop and strengthen an ecosystem of open scientific information as a public good.”.