TICAL2021: The launch of the connectivity of the BELLA Programme marked the first day 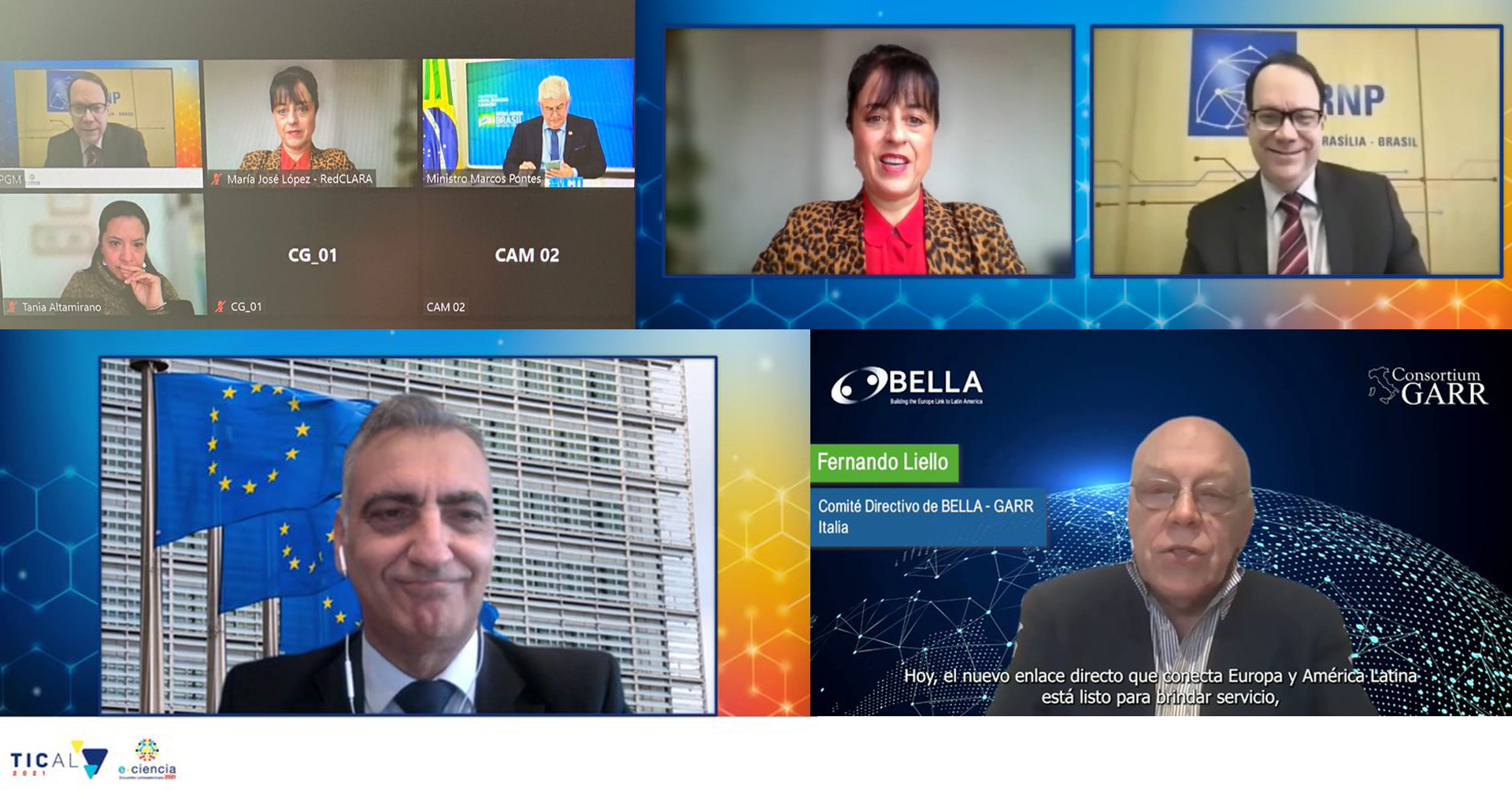 With the participation of Thomas Skordas, Director of the Directorate of "Digital Excellence and Scientific Infrastructure" of DG CONNECT of the European Commission, Thomas Skordas, the Vice Minister of Science, Technology and Innovations of Brazil, Sergio Freitas, and the Executive Director of RedCLARA, the connectivity of the BELLA Programme was inaugurated during the opening ceremony of the eleventh version of the TICAL Conference, and of the 5th version of the Latin American e-Science Meeting that will be developed jointly and online until September 2 of 2021.

At 2pm GMT, today August 30, 2021 the TICAL2021 Conference and the e-Science Meeting began with the announcement and celebration of the launch of connectivity of the BELLA Programme and the start of data transfer through the submarine cable that links Europe and Latin America, EllaLink.

After the presentation of a BELLA video in which the leaders of the participating academic networks highlighted the benefits of the BELLA connectivity, Luis Eliécer Cadenas, Executive Director of RedCLARA -who was confirmed in the position by the Institution's Board of Directors for the next four years-, in his welcome speech he thanked all those who have been part of BELLA from its initial conception to the achievement of the longed-for connectivity.

Cadenas' intervention was followed by the one of Thomas Skordas, Director of DG Connect's "Digital Excellence and Science Infrastructure” Directorate and current Deputy Director-General of DG Connect of the European Commission, who widely celebrated the start of connectivity from BELLA through the EllaLink submarine cable: “EllaLink and the entire BELLA Programme are our flagship example of cooperation with Latin American partner countries. They can also be seen as a concrete step towards completing the Atlantic data gateway. BELLA and EllaLink should allow the two continents to increase the collaboration between our end user groups and in particular in the areas of common concern. EllaLink will speed up data transfer between the researchers on both sides of the Atlantic and will enable data intensive science and future cooperation in critical areas”.

Skordas specifically highlighted “the opportunity of working together to meet the environmental and climate challenges, finding effective solutions in time of pandemics, and understanding how the human body works to discover new treatments. It will also enable collaboration in numerous fields of technology at the service of science such as high-performance computing, artificial intelligence, the Internet of things and emergency communications. For example, it will enable faster and more reliable transfer of processing of the Earth observation data that are coming from the EU’s Copernicus Programme and the Latin American observatories. When it comes to emergency responses this can directly contribute to saving a lot of lives”.

After the speech by the authority of the European Commission, who took the opportunity to invite Latin American scientists to participate in the Destination Earth initiative, the floor was given to the Executive Director of RedCLARA who spoke of the initiatives that are promoted thanks to BELLA and gave lights on the future: "We are working so that by 2025, all of Central America is connected to the high-speed network for research of RedCLARA and the BELLA Programme, and by 2030 we will have included the islands of the Caribbean."

The opening ceremony of TICAL and BELLA ended with the participation of Sergio Freitas, Vice Minister of Science, Technology and Innovation of Brazil who highlighted: “Education, research, science and economy will benefit from the infrastructure that is being inaugurated; BELLA will promote research and education for the next 25 years. This research infrastructure is essential for Latin America. The conclusion of cross-border cooperation and collaboration represents the union of the Latin portion of the American continent with the European one”.

TICAL2021 and the 5th Latin American e-Science Meeting continued the day with its traditional parallel sessions -where ICT directors from Latin American universities and researchers present their work-, and workshops.