In Chile: Commission of Extreme Zones get to know the progress of the "Patagonia Project" 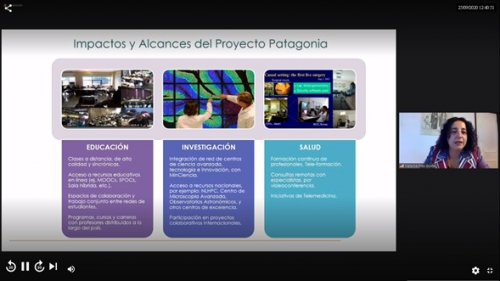 The Chilean Research and Education Network (REUNA), gave details of the initiative that will allow the construction of a “digital bridge” that unites all research and higher education institutions in the southern macro-region with the country and the world, integrating them to the global networks on these issues.

(Source: Senate of Chile / REUNA) Congratulating the initiative and giving all its support, the Special Commission for Extreme Zones and Special Territories, chaired by Senator José Miguel Insulza, took note of the progress of the Patagonia Project, presented by the Research and Development Network. Education in Chile (REUNA).

See the details of the Commission here.

REUNA and representatives of the Universities of Magallanes and Aysén, announced the scope of the initiative, which will allow the construction of a “digital bridge” that unites all research and higher education universities in the southern macro-region of Chile with the country and the world, integrating them to the global networks on these issues.

The speakers highlighted that in Latin America alone 13 countries already share their knowledge through these platforms and today this macrozone is without access to this network; In addition, the impact and the need for mutual collaboration that this effort requires in order to advance, for example, in the country's astronomical and space potential, were analyzed. Currently the national network has 8,500 kilometers and only reaches Puerto Montt.

In this context, the dean of the University of Aysén, Natacha Pino, said that there is “a great debt in the southern macro-zone, which is disconnected from this type of network, despite the enormous scientific potential and knowledge centers it has and here the proposal of the Patagonia. (…) Transforming the Southern Macrozone into a development and research hub in the era of Big Data and with a territorial sense is a tremendous opportunity”. Thus, he indicated that “political support is vital, where the Extreme Zones Commission plays an important role”.

REUNA's executive director, Paola Arellano, as well as Dean Pino, emphasized that the key is to articulate the efforts of different actors. Regarding the impacts, Paola Arellano explained that they will be focused on equity and opportunities, promoting collaboration and quality of access.

The senators present - Carolina Goic, Francisco Chauán, Carlos Bianchi, David Sandoval and José Miguel Insulza - highlighted issues such as the importance of bandwidth and a strategy was proposed for aspects such as optical fiber. All of them valued the effort to “access on equal terms” and called for opportunities to be given to the geographical characteristics of extreme areas.